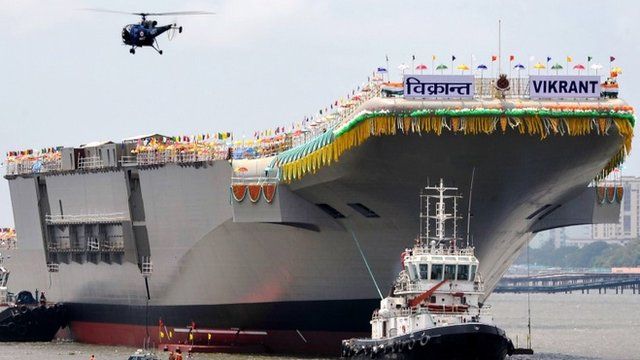 In 2003 govt approved this plan to build Indigenous Aircraft Carrier with our own technology and with made in India products. INS Vikrant manufactured with High Strength Steel supplied by SAIL Steel plant Bhilai, Rourkela, and Durgapur, with assistance  of DRDO and Steel authority of India so that standards can be maintained to world class. INS Vikrant is the biggest warship to manufactured in India. Work on this Warship is in two phase, first phase is till its launch in 2010 and second phase will cover till its delivery to Indian Navy. Two countries are helping India in this project Italy and Russia. Italy providing assistance for propulsion system integration and Russia providing aviation technology.
CARRIER AIR GROUP

India have a long experience of operating Aircraft carrier so he know which type of fighter he need for its Indigenous aircraft. INS vikrant is designed in such a way that MIG-29k can be operated easily, it will deploy up-to 30 fixed wing Aircraft. Other than MIG there are several other combat aircraft also deploy on INS vikrant like SEA HARRIER, Naval version of TEJAS, NAVAL VERSION OF HAL DHRUV, Ka-31 helicopters. Ka-31 will provide airborne early warning coverage and Sea Harrier will provide Anti Submarine Capability.
WEAPONS

INS not only have a strong air group to destroy enemy but it also have a good defense system which is a mix up of different weapons like Four OTOBreta 76 mm Rapid guns, Barak 1 and Barak 8  surface to air missiles others weapons are AK-630 and CIWS. SENLEX RAN-40  early warning system. This Aircraft Carrier  will also feature jamming capabilities.

As china increasing its influence in Indian ocean and the world power order is changing India need to be prepared for the future threats. India has a vast sea Area which it need to protect and INS Vikrant like aircraft help India in it. INS Vikrant will be inducted in Navy by 2023. By then it will increase the power of Indian Navy and help to maintain balance of power in Indian Ocean. With the Induction of INS Vikrant India will enter into elite group of countries who has technology to manufacture a Aircraft Carrier.