Among these only arjun is endogenously designed and developed other two T-72 and T-90 are imported from Russia. Tanks plays an vital role in the battlefield and many time in the history tanks change the face of war. With change in time tanks also changing with a fast pace, Tanks adapting new technologies and modern equipment to counter enemy in the battlefield.

Arjun is the first main battle tank which is developed and designed endogenously by the state owned defense manufacturing company DRDO and manufacturing of this tank is undertaken by Heavy Vehicles Factory, Manufacturing cost for one Arjun mk1 is 559 Million INR. Arjun is the third generation battle tank and an upgraded version of Arjun mk2 is also in its final developmental stages soon it will be completed. It is the heaviest tank in this list. It offers troops with superior firepower, high mobility and protection with the modern gadgets that are installed in it. Yes it is true that this tank is not comparable with the modern tanks of the western world but it is able capable to compete with its enemies like china and Pakistan , this is also a fact that India never built this type of giant machines. It provide a base for Arjun Mk2 and other future projects and aspiration of India. As per today conditions Indian army has 2 regiments of Arjun mk1 which are of 124 tanks. These two regiments are deployed at border {Thar Desert} with one of the uncertain neighbor that is Pakistan. Arjun is developed according to the India terrain that why in some condition he performed better then mighty T-90 which is the front runner tank of Indian army. Arjun mk1 is equipped with 120 mm as main rifle gun , 7.62 mm co-axial machine gun, 12.7 mm machine gun is fixed on turrent to aim personnel and aircraft targets. Arjun mk1 is powered by single MTU 838 KA 501 ten cylinder diesel engine which can produce 1400 bhp which help it to reach its maximum speed of 70 km/hr which is a decent speed for this kind of machine. 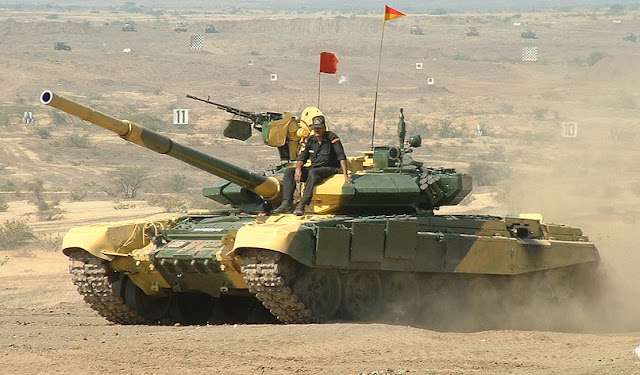 T-90 Bhishma is the locally manufactured variant of Russian T-90 tank with some endogenous techs. India has a plan to come up with 21 regiments of T-90 Bhishma { 62 tanks in each regiment} by 2020. India these tanks are manufactured at Heavy Vehicles Factory, HVF manufacture the T-90M variant of T-90s which Indian purchased from Russia in past. T-90 tank is protected by both conventional Armour and explosive reactive Armour. T-90 come u with 125 mm smooth-bore gun, 12.7 mm kord heavy machine gun, and 7.62 mm PK-MT. This heavy machine is powered by 12 cylinder diesel engine which is able to produce 1300 bhp of power which help him to reach it maximum speed of 60 km/hr. India one of biggest user of this tank because this fulfill the requirement of the Indian military with some endogenous upgrade and there are some foreign upgrade are also in it with which it is superior to the Russian T-90. 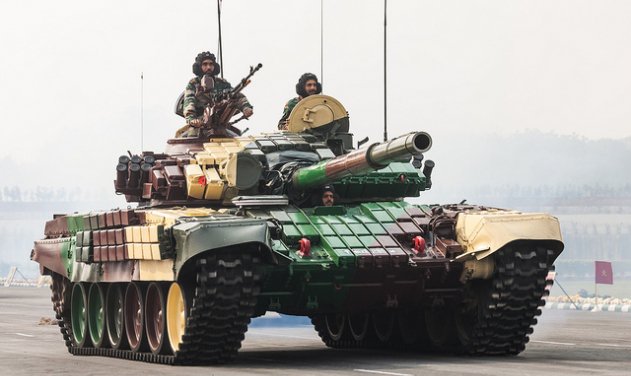 T-72 tanks are purchased by India directly from USSR. T-72 is the one of the most widely produced tanks a total of 25,000 tanks are produced and sold world wide, while India has around 1900 tanks as of 2008. India has its two variants one is T-72 M and second one is T-72 M1. T-72 seen in many wars around the world and performed very well. T-72 is armed with 125 mm smooth-bore gun as a main gun and secondary gun is 7.62 mm PKT Machine gun  and a 12.7 mm caliber NSV machine gun. T-72 ajeya is protected with explosive Armour protection and 12 smoke grenades. Since its purchase India done sufficient amount of upgrades to meet the modern requirement.  T-72 ajeya weigh around 50 ton which is similar to weight of 12 elephant. T-72 also able to cross water hurdles with the help of some minute changes, its does not swim but it walk on the ground of water crossing.