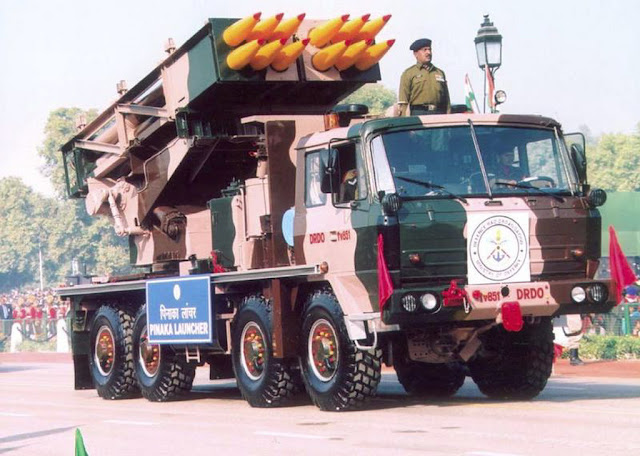 Pinaka is Multi Barrel Rocket Launcher is a Medium Range Rocket Artillery Developed by DRDO indigenously and used by Indian Army since two decades. Pinaka is name after the Lord Shiva Dhanush's name is Pinak. Pinaka Multi Barrel Rocket Launch System is Mounted on a Tatra Truck for Mobility. Pinaka is one the lethal weapon used by Indian Army to destroy the enemies Bunkers, Air terminal locations, Artillery Position, and Neutralize  enemy position on the mountains. In modern artillery warfare Multi Barrel Rocket launcher give an upper hand over traditional artillery like Howitzer and Dhanush, in Operational mobility, Flexibility, And Accuracy. Pinaka work on "Shoot and Scoot" technique, Shoot and Scoot is a artillery tactic of firing at a target and immediately change its position or move to another location to avoid counter battery fire from enemy artillery.

Pinak Multi barrel Rocket Launcher is Mounted upon a Tatra Truck with 12 Rockets in its Barrels on the back of Tatra Truck, all Rockets can be fired in 44 seconds, Each Pinaka battery is a group of six launcher vehicles{ each launcher carry 12 Rockets} is able to destroy the area of 1 kilometer square in just 44 sec by firing 72 Rockets. Pinaka Multi Barrel Rocket Launcher is able to fire Rockets in both burst mode or in single mode, Each launcher has its own Fire Control Computer Linked with the command post . Each Pinaka Rocket is capable of carrying a 100kg of payload for a range of 40km, with high accuracy. The Rockets can be fitted with wide range of war heads including HMX, Anti-Tank Minelet warhead, Anti-Tank Bomblet. 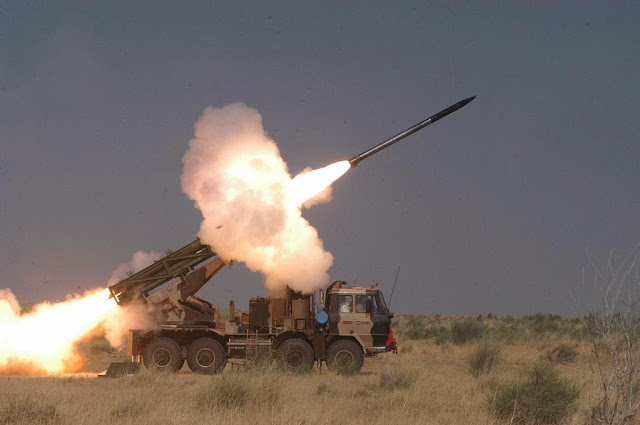 In Pinaka Multi Barrel System, a single Pinaka Battery Composed of six launcher vehicles, Six Loader-cum replenishment vehicles and two command post vehicles. Each launcher can fire in same direction as well as in different direction too. It is euipped with an on board generator supplying primary source of power for launcher operations.