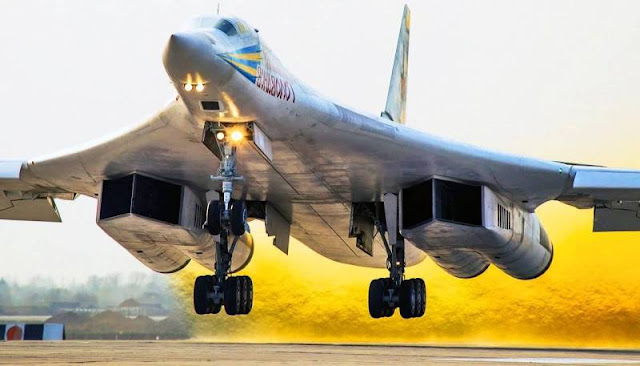 Tupolev Tu-160 is the world's biggest and fastest strategic bomber designed by the Tupolev Design Bureau and built by Kazan Aircraft Production Association. Tu-160 took its first flight on 18 Dec 1981 and currently in service with Russian Aerospace Forces. NATO reporting name of Tu-160 is Blackjack. Tu-160 is a 2+ Mach supersonic, variable-sweep, wing heavy, strategic bomber, largest and heaviest bomber ever built only second to XB-70 Valkyrie USA {Retired}. Tu-160 is the last strategic bomber developed by the Soviet Union. About 35 aircraft were built of which only 16 are in service in Russia.
Tu-160 is a strategic bomber whose main purpose is to deliver Nuclear and Conventional weapons to an enemy nation or on its targets to destroy them completely. Tu-160 has the capability to fly day and night and can be operated at all geographical and all-weather. Somewhat closest rival of Tu-160 is US B-1B but 1/4th in the size of Tu-160. Tu-160 requires a 3.5 km of solid concrete for take-off.
Tu-160 has two weapon bays which can carry a payload of up to 45,000 kg in its bay. Tu-160 has two internal rotary launchers, Primary armament of the Tu-160 is Raduga Kh-55SM nuclear cruise missile and the secondary armament of Tu-160 is AS-16 Kickback Short-range nuclear missiles. Short-range cruise missiles and Strategic cruise missiles enable it to deliver nuclear strikes to targets with pre-assigned co-ordinates.
Tu-160 has gone under many upgrades during this decade, now Tu-160 is equipped with Modern Avionics, Upgraded Airborne Radar, and Navigation Equipments. Tu-160 is a highly computerized aircraft that includes a flight control system, attack radar, electronic countermeasure system, and automatic controls.
In 2019, Two Tu-160s took a 13 hours non-stop flight over the Indian Ocean, Arabian Sea, and the Caspian Sea covering 11,000 km distance landed at Waterkloof Air Force Base in South Africa. It was the first time for the Tu-160 Aircraft that it landed on African Soil.
HOW FAST IS TU-160? 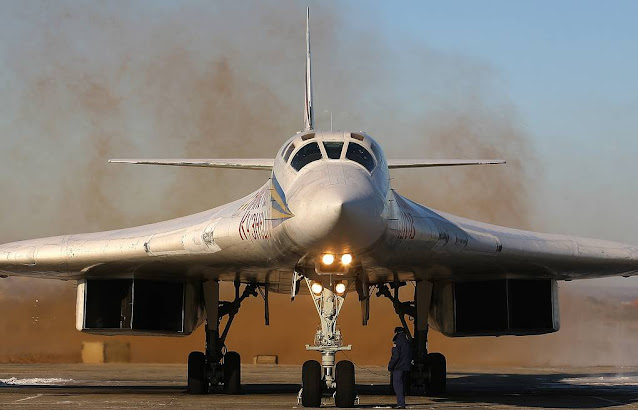 Tu-160 is the fastest bomber currently in service with Russian Airforce. Tu-160 is powered by four Smara NK-321 Afterburning engines, each engine produces 137.3 kN of dry thrust and 245 kN of thrust with afterburner. Tu-160 has a maximum speed of 2.05 Mach and It has a range of more than 12,300 km.
DOES INDIA NEED A STRATEGIC BOMBER? 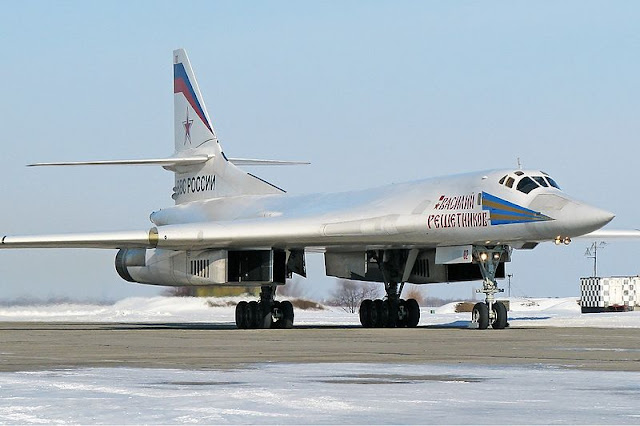 Currently, Indian Airforce does not have any Bomber, IAF using SEPECAT Jaguars for Deep Penetration Strike Roles where it can be used as a bomber to drop Laser Guided Bombs and Cluster Bombs on Strategic Targets. Mirage 2000 can also perform the role of the bomber for Indian Airforce.
India has only a threat from two countries small threat from Pakistan and Main Rival is China, both nations share land borders with India. The bomber is designed to attack targets that are located far away from the country which plans the operation with a heavy payload. "Since India's main Rivals are not far away, so India Does not need a longe range bombers", Defence Ministry Opinion.
India has Fighter Aircraft like Mirage 2000, Jaguar, and Dassault Rafale which has the ability to deliver nuclear warheads. Also Indian has the ability to launch nukes from land with missiles AGNI ICBM {Agni 5 has range of 5000 km officially} series and India also has the ability to deliver nukes from the sea from submarines.
Currently, India does not need any Bomber Aircraft but in near future, India needs a Bomber Aircraft because Inda's main rival China is developing its own bomber aircraft, and in near future PLA will have a fleet of its own bomber which creates Instability in the region and causes a threat to India. To counter this situation India has to purchase a bomber from a foreign nation. Because today India does not has the ability to produce its own bomber.
India currently developing strategic stealth UAVs like DRDO AURA/Ghatak which can be used for striking deep in the enemy territory with Laser-guided bombs and missiles. DRDO AURA is in its development stage and will be inducted in Indian Armed Forces by 2025.