WHY TEJAS IS IMPORTANT FOR INDIAN AIRFORCE?

HAL Tejas is a Delta Wing made in India Single Engine, Fourth Generation fighter multi-role fighter aircraft designed by Aeronautical Development Agency and Manufactured by Hindustan Aeronautics Limited for Indian Air-force. HAL Tejas is the result of the program that was launched in back the 1980s to replace the aging fleet of IAF MIG-21's.HAL Tejas is the smallest and lightest supersonic combat aircraft in its class in the world. Tejas is a Tail-less compound Delta-wing configuration that provides better high alpha performance characteristics than conventional wing designs. HAL also developing a Naval variant of Tejas for the Indian Navy, with the intention to deploy Tejas on Indian Navy Aircraft Carriers.
HAL upgraded the Tejas Mark 1 to Tejas MK 1A which comes with more than 40 improvements over the Mark 1 variant and is expected to hit the production line in 2023-2024. HAL Tejas is developed to play the primary role as "Air Combat" and the secondary role as "Offensive Support" with 'Reconnaissance'. Due to the very small size of Tejas and it is painted with Radar Absorbing paint {Tejas is extensively built with composite materials that are the bad reflectors of radar} hence Tejas has very low Radar Cross Section due to all these factors it has some stealth characteristics. 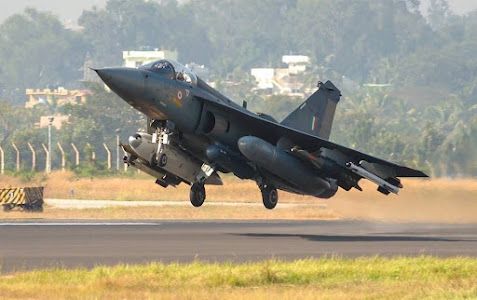 Tejas is a mixture of modern technologies around the world. Tejas is powered by an American GE 85kN F404 turbofan engine { India also developing its own turbofan engine Kaveri, it will replace GE F404}, Bristish Avionics are installed in it with an Israeli Radars system. The Indian Govt also purchased Derby missiles from Rafael Advanced Defence Systems and integrate them successfully in HAL Tejas.
HAL Tejas has more than 50% Made In India components. Tejas has Made in India electronic warfare suite which is developed by a firm situated in Bangalore it includes Radar Warning Receiver and jammer, Laser warner, Missile approach, and flare dispenser. Tejas carry a variety of weapons in their arsenal, for close combat Air-to-Air missiles, Beyond Visual Range missiles, it also carries conventional and smart laser-guided bombs for ground targets. The cockpit of HAL Tejas has two 76mm x 76mm color liquid crystal multifunction displays developed by Bharat Electronics. Tejas is a small bird in the sky that can play different roles.
Indian firm Gas Turbine Research Establishment also developing its own new Turbofan engine, the GTX-35VS Kaveri for HAL Tejas.  The Kaveri engine will produce 80.5 kN of thrust with afterburn.
HAL Tejas is a fourth plus generation, supersonic, highly maneuverable, multi-role, smallest and lightest in its class. It is considered as the "Game Changer" aircraft for Indian Defense. HAL Tejas will help to boost Indian Defence manufacturing and decrease India's dependence on foreign defense products. India is now planning to develop a twin-engine heavyweight version of HAL Tejas.